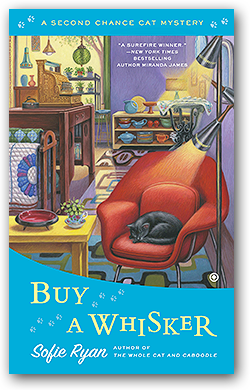 There were no customers in the store. Charlotte was behind the cash desk with a cloth in her hand and a set of sherry glasses on the counter in front of her. She still had the bearing and eagle-eyed gaze of the high school principal she'd been. Even in flats she was taller than I was. She had soft white hair and warm brown eyes behind her glasses. Right now those dark eyes looked troubled.

When I'd left for lunch Charlotte had told me that she was going to dust and polish all the glassware in the store. Now she was frowning and her glasses had slid halfway down her nose. Rose had her apron in one hand. The other hand was on her hip and she was looking up at Liz, who had several inches on petite Rose.

I knew by her stance and the way her chin was jutting out, that Rose was arguing about something with Liz. Liz was standing in the middle of the room. She was wearing a vivid cardinal red coat and a soft, butter-colored hat. As always she looked polished and elegant. Her nails were manicured and her blonde hair curled around her face. Unlike Rose and Charlotte, Liz refused to let her hair go gray.

"If the Good Lord hadn't intended me to be blonde he wouldn't have created Light Golden Blonde, number thirty-eight," she'd said emphatically to Rose when the later had suggested Liz let her hair "go natural."

Beside Liz, Avery was engulfed in an oversize black parka I knew she'd bought for eight dollars at Goodwill.

"Oh for heaven's sake," Liz said, waving one hand as though she was shooing away a bug. "Just call him."

"No," Rose said. I knew that tone and that body language. Liz should have as well. The two of them had been friends for most of their lives even though they were very different. Rose dressed for comfort, Liz was all about style. Rose favored sensible shoes and Liz had never met a pair of heels she didn't like.

Rose turned to look at me over her shoulder. "No one," she said.

I looked at Rose. "Why do you need a lawyer?"

When Arthur Fenety had been murdered back in the fall and their friend, Maddie Hamilton arrested for the crime, Rose, Liz and Charlotte—unhappy with the way the police were handling the case—had investigated, with some help from Alfred Peterson, who had to be the world's oldest computer hacker, and, well, me. Nick had argued vehemently with his mother about it. I'd tried my best to rein them in, but somehow I'd gotten pulled into the investigation myself. Josh had taken on Maddie's case when I asked and Liz had quietly covered the bill.

"What would be the harm in at least talking to him?" Charlotte asked. As a former school principal she was often the voice of reason.

Rose pointed a finger from Liz to Charlotte. "Both of you need to have your hearing checked because I've told you twice now. Josh is a very nice young man but I don't need a lawyer."

Liz made an exasperated snort and shook her head.

I turned to Avery. "What's going on?"

She shrugged. "Rose got kicked out of her apartment. Nonna and Charlotte want her to make a stink about it."

I turned back to look at Rose again. "You were evicted?" I said.

Silently she pulled an envelope out of her pocket and held it out to me.

I took out the single sheet of paper inside. It was an eviction notice. Rose had until the middle of February to vacate her apartment at Legacy Place. There was no reason given.

Legacy Place was the former Gardner Chocolate factory—"A little bite of bliss in a little gold box." In the early nineties the company had built a new manufacturing facility just on the outskirts of North Harbor. The old factory had had a number of lives in the next twenty years, and then about three years ago the Gardner family had renovated the building into a much-needed apartment complex for seniors. Rose derisively called the place "Shady Pines."

"Rose, they have to at least tell you why they've asked you to leave," I said, gesturing with the envelope. "Maybe it's not a bad idea to call Josh."

Josh Evans had grown up in North Harbor. Not only had he been Maddie Hamilton's lawyer when she was accused of Arthur Fenety's murder, he'd known Rose—and Liz and Charlotte and my grandmother since he was a kid. I knew he'd be willing to help.

I knew she'd only originally agreed to the move to the seniors' apartment complex to put her daughter's mind at rest. Getting evicted was the perfect out for her. I looked at her without saying anything. Her cheeks grew pink and her gaze slipped away from mine. I was right.