A Case of Cat and Mouse 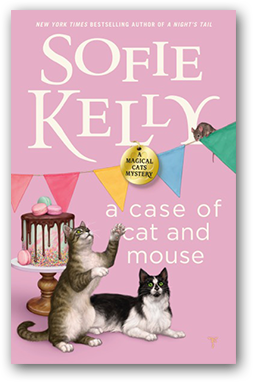 I drove down Mountain Road and parked in the Community Center's parking lot, turning down my driver's side visor to display my show-parking pass. The building where the actual filming of the show took place was set up beside the boardwalk running along the waterfront. It was a temporary structure that Burtis Chapman and his crew had assembled with a PVC roof, steel cladding and two steel roller doors. There was no other place in town large enough to work. The building looked very utilitarian on the outside. On the inside the space had been set up to resemble a cozy country kitchen with (faux) exposed wooden ceiling beams, retro-look appliances and white Shaker style cabinets.

The walking trail that the boardwalk was part of was one of the highlights of the downtown area for me. It curved its way from the old warehouses down by the point, went past the downtown shops and businesses including the library, and continued all the way out beyond the marina, past Wild Rose Bluff. The path was shaded most of the way with tall elm and black walnut trees. I'd walked it a lot when I had first arrived in town.

While filming of each episode took place on the kitchen set, a practice continued from the original Baking Showdown, the Community Center was where everything else was happening for the duration of the production.

I was just about to step in the back door when someone breezed by me without speaking. Kassie Tremayne, one of the show's judges. She wore a pale mint-colored dress with short sleeves and a triangle cutout at her midsection. Her ankle-strapped, stiletto heeled pumps had to add close to four inches to her height which still put her below my five foot six. Her blonde hair was pulled into a sleek, low, ponytail. She looked so elegant and pulled together. I took a quick glance down at my gray trousers to see if there was any cat hair stuck to them.

Kassie was beautiful. Or she would have been if she hadn't had a slightly dissatisfied expression on her face all the time. She scrawled her signature in the sign-in log swept up the stairs without even acknowledging that I—or anyone else—was there.

To my surprise Harry Taylor was at the security desk just inside the back door. "What are you doing here?" I asked as I signed in.

"I'm filling in for Thorsten," he said. "He had to go rescue the camera crew that went to film some background shots over by the marina and somehow managed to get their van stuck." Harry smiled. "What are you doing here?"

"I came to bring some information to Eugenie," I said, patting my messenger bag. "She is here, isn't she?"

He nodded and gestured to the cup and saucer on the desktop. "She brought me tea and a cookie about five minutes ago."

Harry had helped set up the cooking stations and he had built a set of cupboards when the ones that had been shipped in from Chicago had been deemed to be too small for the back wall of the set. He had also unearthed a cabinet for Eugenie's office since she was very particular about keeping her research organized. She in turn had been sharing her tea with him. There was none of the pop a tea bag in a cup of microwaved hot water stuff that the crew drank for her. Eugenie had her own kettle and a china teapot complete with quilted cozy.

Rebecca and I had watched the two of them talking on set one day. "I think she likes the cut of Harry's trousers," Rebecca had whispered. Based on the gleam I'd noticed in Eugenie's eyes when she talked to Harry, I had a feeling Rebecca might be right.

I went up the stairs and headed toward Eugenie's office. Kassie was several steps ahead of me.

Kate Westin, one of the contestants on the show, came around the corner, wrapped up, as usual, in one of her long sweaters, her hands jammed in her pockets. She pulled a hand out and held out something to Kassie. It looked like a gold cell phone case. "I found this on the set," she said. "Norman said he thought it was yours."

Kassie took the phone from her. "Where did you find it?" she asked.

"It was on the floor by the ovens," Kate said.

"It must have fallen out of my bag." Kassie swept a finger across the screen and seemed satisfied with what she saw. Still looking at the phone she moved around Kate and disappeared around the corner. It didn't seem to occur to her to say thank you.

Kate stood there for a moment and then she turned and went the same way.

I didn't think either one of them had noticed me.

I found Eugenie in her office.

In my opinion she'd been an excellent choice to host the show. Eugenie Bowles-Hamilton was not just an acclaimed cookbook author, she also owned a very successful bakery in Vancouver, Canada. As one of the two co-hosts of the Great Northern Baking Showdown she was the straight woman to musician Russell Perry. The lead singer for The Flying Wallbangers was a lot funnier than I'd expected.

Eugenie was tall, easily two or three inches above my five six. I'd guessed that she was in her fifties but I wasn't really sure. She wore her silver hair in a short bob with bangs. She tended to dress in gray or navy and she always wore a pair of oversize earrings and a Cartier Tank watch with a black leather strap. She reminded me of actress Helen Mirren.

"My face just disappears in the crowd without my earrings," she had told me when we first met and I had complimented her on the blue baroque crystal dangling earrings she'd been wearing.

Eugenie had an impeccable British accent, even though she'd live on the Canadian west coast for the past twenty years. It added a level of credence to everything she said. I loved listening to her read whatever notes I brought her out loud.

I found her sitting behind the wood and metal desk that Harry had managed to shoehorn into her office. Her cohost, Russell, was perched on the left front corner of the desk. If he had an office of his own, he was never in it. He was almost always in Eugenie's. The singer was dressed in his ubiquitous black skinny jeans and one of his many pair of Vans shoes—red and black plaid this time. He wore a black, short-sleeve tee shirt that showed off the muscles in his arms. His spiked blonde hair and the mischievous smile on his face made him look more like a teenager than a grown man. "Hey Kathleen," he said.

I smiled back. It was impossible not to. Russell just had that kind of personality. Being a co-host on the show was a chance for him to clean up his image a little. This past winter a video clip of him had shown up on line and gone viral. Russell was dancing to Taylor Swift. It wasn't the dancing or his choice of music that was the problem. Although it was a surprise to most people that the alt-rocker was a Swiftie, it was the fact that he was wearing nothing but a red beanie and a pair of Sorrels as he danced, back to the camera, to Shake it Off. According to my friend, Ruby, Russell's arms weren't the only muscular part of his body.

Eugenie looked up and smiled. "Hello Kathleen. Thank you for bringing next week's notes on such short notice."

"It wasn't a problem," I said. "I had everything ready. All I need to do was print out a copy for you." I pulled a brown envelope out of my bag and handed it over the desk.

Eugenie undid the flap. "Do you have time to wait while I skim the material to be certain there's nothing else I need? Not that I believe I will. You're always so thorough."

Eugenie indicated the lone chair in front of her desk. Before I could sit down Russell frowned and leaned toward me. "You have something caught in your hair," he said.

It was likely a clump of cat hair or some part of a yellow catnip chicken. I lifted a hand but before I could run my fingers though my hair Russell reached over and pulled a cherry—complete with the stem still attached—from behind my ear. He immediately looked at Eugenie.

"Better, but I could still see a bit of the stem when you palmed it," she said without actually looking up from the notes she was reading.

"I need longer fingers," Russell said, shaking the cherry as though it were a tiny bell.

"No, you just need a little more practice," Eugenie countered.

"I didn't see anything, if that matters," I said.

"No offense, but the camera is more observant." Russell slid off the edge of the desk. "I'll go work on it in front of the mirror." He smiled. "Later Kathleen." With a wave of the cherry he was gone.

Now I understood why Eugenie had me to find out if the fruit grew in Minnesota.