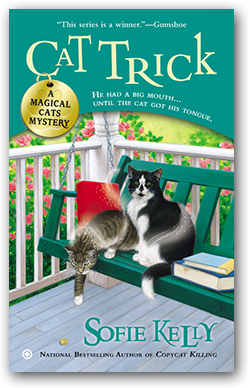 Hercules was sitting in front of the refrigerator and Owen was under the table when I went down to the kitchen. I started the coffee maker and then gave the cats their breakfast. Owen used one paw to push his dish across the floor so there was a good three feet of space between him and his brother. Clearly he was in a mood about something. It was almost as if he were...jealous?

No. As special as both cats were, there was no way Owen understood that Hercules was posing for Ruby again this morning.

Owen took a bite of food from his bowl, set it on the floor and shot Herc a look. At the same time he made a sound in the back of his throat that sounded an awful lot like a disgruntled "hmpft."

I could accept that Owen had the ability to make himself disappear. Strangely, it was harder to believe that he was in a snit because Hercules was going to have his portrait painted.

I let him sulk while I had my own breakfast. As soon as Hercules was done eating he began an elaborate face washing routine. Even though Owen seemed to be ignoring his brother, I saw him sneak little peeks in Herc's direction. And in return, Hercules stretched a couple of times, and casually eyed Owen.

I put my dishes in the sink and started putting together what Maggie called one of my clean-out-the-refrigerator salads. "I could have gotten a gerbil," I said as I opened containers to see what I had for leftovers. "Gerbils are cute and furry. They don't shed on the furniture and they never have sardine breath." The boys were too busy ignoring each other to pay any attention to me.

I was trying to figure out what else I could add to the bowl when I heard cat grumbling behind me. Swinging around I saw Hercules and Owen, whisker-to-whisker, glaring at each other. "Hey!" I said sharply, reaching for the kitchen tap sprayer. Two furry heads swivelled in my direction. "I know how to use this and I will. At this distance I could knock a sardine cracker crumb off either of your chins. Would you two like me to demonstrate?"

They looked at each other again, then, as though some unspoken signal had passed between them, both cats sat down.

"Wise choice." I let go of the tap, wiped my hands and walked around the table. "Owen," I said.

He looked up at me, for once not trying any of his I'm-so-cute tricks.

"Ruby is going to do a painting of Hercules."

He made that grumbly sound again. I held up a finger, feeling slightly foolish. On the other hand, I was well aware that Owen in a snit was more than capable of strewing Fred the Funky Chicken parts all over the house.

"It's going to be auctioned off for charity—for cats that don't have any homes, or any catnips chickens to chew on." I tried to look serious and shook my head as I said the part about the chickens, grateful that no one without fur could hear me.

Owen seemed to be considering what I was saying. Or he could have been thinking about catnip chickens.

"And you," I pointed at Hercules. His green eyes focused on my face. "This is for charity. As talented as Ruby is, your portrait won't be going on exhibit in the Guggenheim museum." I held up my thumb and index finger about a half an inch apart. "Try just a little more humility."

I went back to my salad. After a minute Owen came over and rubbed against my leg. "I love you, too," I said, as he headed for the living room.

A soft meow came from the direction of the refrigerator. "Yes, and you," I told Hercules.

Owen hadn't reappeared by the time we were ready to leave. I'd emptied the littler box, filled his water dish, and left a little stack of sardine crackers beside it. I swung the cat carrier bag—which also doubled as a tote for my tai chi shoes—up onto my shoulder, locked the door and headed out to the truck.

Hercules poked his head out of the top of the bag as I drove down the hill, but he didn't bother climbing out. I parked in Maggie's slot in the small lot behind the River Arts building—she'd given me the okay. Hercules and I were a little early. Ruby's truck wasn't in her place.

I grabbed the cat, got out and locked the truck. Then I walked over to the side of the building and looked down the street toward the boardwalk. Both tents were up now and I wondered if Burtis and Mike had come to some kind of agreement about the set-up.

The carrier wiggled against my hip and Hercules stuck his head out again. "Ruby should be here any minute," I said.

He looked around, then focused on the tents over on the grass and his green eyes narrowed. He shifted in the bag and before I realized what he was doing, jumped out and started purposefully down the street along the side of the arts center.

"Hercules, get back here!" I shouted. I started after him but he was already at the curb. He looked both ways, crossed to the other side, and then continued down the hill, intent, it seemed, on checking out the tents.

I had to wait for two cars to pass before I could follow. By then, he'd made it to Main Street. Again he looked for cars and then trotted across the street. My heart was pounding like a Caribbean steel band in my chest. I ran, yelling for the cat, but he didn't even break stride.

When he reached the first tent Hercules looked back over his shoulder at me, then walked right through the heavy canvas panel and disappeared inside. I was maybe half a minute behind him. I had to duck around the tent flap because I couldn't just pass through it.

"Hercules, wherever you are, get over here right now!" I called, waiting for my eyes to adjust to the darkness inside the canvas structure before I started looking for him.

Turns out I didn't need to look for the cat at all. He was sitting on the grass next to a plastic lawn chair. Mike Glazer was in the chair. Even in the dim light, I was almost positive the man was dead.