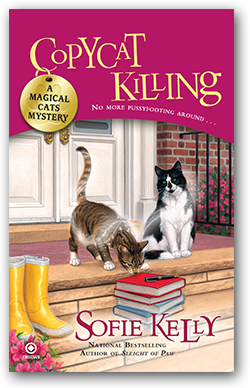 I'd never heard a cat laugh before—I didn't think they could—but that's what Owen was clearly doing. He was behind the big chair in the living room, laughing. It sounded a little like hacking up a fur ball if you could somehow add merriment to the sound.

He looked up at me and it seemed as though the expression in his golden eyes was a mix of faux-innocence and mirth. "It's not funny," I hissed.

Okay, so it was kind of funny. Owen's brother, Hercules, was sitting in the middle of the kitchen floor, wearing boots. Specifically, black and white boots to match his black and white fur, in a kitty paw print design with a fleece lining and anti-slip sole. They were a gift from my friend, Maggie.

I went back into the kitchen. Hercules gave me a look that was part acute embarrassment and part annoyance.

"They are kind of cute," I said. "You have to admit it was a very nice gesture on Maggie's part." That got me a glare that was all venom.

"I'll take them off." I crouched down in front of him. He held up one booted paw and I undid the strap. "You're just not a clothes person," I told him. "You're more of an au natural cat."

I heard a noise behind me in the doorway. "And Owen is very sorry he laughed at you. Aren't you, Owen?" I added a little extra emphasis to the last words. After a moment's silence there was a soft "meow" from the other side of the room.

I took the second boot off and Hercules shook one paw and then the other. I stroked the fur on the top of his head. "Maggie was just trying to help," I said. "She knows you don't like getting your feet wet."

I stood up, went over to the cupboard to get a handful of kitty crackers and made a little pile on the floor in front of Herc. "Here," I said. "These'll help." Then I scooped up Owen. I could tell from the way his tail was twitching that he'd been thinking of swiping a cracker.

"Leave your brother alone," I warned, carrying him upstairs with me. "Or I'll put those boots on you and I'll tell Maggie you like them."

He made grumbly noises in his throat. I set him on the floor and he disappeared into my closet to sulk. I pulled on an extra pair of heavy socks, brushed my hair back into a low ponytail and stuffed my wallet in my pocket.

Hercules had eaten the crackers and was carefully grooming his front paws when I went back downstairs. "I'm going to meet Maggie," I told him, pulling my sweatshirt over my head. "I'll figure out something to tell her."

I locked the kitchen door behind me and walked around the side of the house to the truck. My truck. Sometimes I still got the urge to clap my hands and squeal when I saw it. It had started out as a loaner from Harry Taylor Senior and when I'd manage to retrieve some papers about Harry's daughter's adoption, he'd insisted on giving me the truck.

I'd moved to Mayville Heights about a year ago to become head librarian and to oversee the renovations to the library building. Now we were just a few months away from celebrating the library's centennial. When I moved, I'd sold my car. I'd sold just about everything. Coming to the town was a new beginning for me, a chance to take a break from my flamboyant family, and to regroup because Andrew—handsome, charming Andrew—the man I was supposed to spend the rest of my life with, had gotten drunk after we'd had a fight and ended up married to a waitress from a 50's diner.

Mayville Heights was small enough that I could walk everywhere I wanted to go. But it was nice not to have to carry two bags of groceries up the hill. And with all the rain we'd had in the past week, and all the flooding, I never would have been able to get to the library—or a lot of other places—without the old truck.

The morning sky was dull, and the air was damp. We'd had a week of off and on rain—mostly on—and the downtown was at serious risk of major flooding. The retaining wall between Old Main Street and the river was strong, but it had been reinforced with sandbags just in case. We'd spent hours two nights ago moving those bags into place along a human chain of volunteers.

This was the second day the library was closed. The building was on higher ground, a rise where the street turned, and the pump Oren Kenyon had installed in the basement was handling what little water had come in, but both the parking lot and the street were flooded.

Maggie was waiting for me on the sidewalk in front of the artists' co-op building. The old stone basement had several feet of water in it, and we'd spent most of the previous day moving things from the first floor store into the second floor tai chi studio, in case the water got any higher. There were still a couple of her large collage panels that needed to be carried upstairs.

"Hi," I said. "How late did you stay here last night?" There were dark circles under her green eyes.

"Not that late," she said, as she unlocked the front door.

I followed her inside. Mags and I had met at her tai chi class and bonded over our love of the cheesy reality show, Gotta Dance. She had the tall, lean build of a runner or a dancer, but she was an artist, a tai chi instructor, and she ran the co-op store.

"Why do you have two paperclips in your hair?" I asked.

Maggie put a hand up to her head. "That's what I did with them," she said, pulling the two clips out of her short, blonde curls. "I was doing some paperwork over at the studio."

The two collage panels were up on a table, carefully wrapped and padded. We carried them up the steps without any problems.

I was about to suggest we walk over to Eric's Place for coffee and one of his blueberry muffins when we heard someone banging on the front door.

"Please tell me that isn't who I think it is," Maggie said. Before I could ask whom she meant, she was on her way downstairs.

Jaeger Merrill was outside, his back to the door. Maggie let out a soft sigh and went to unlock it. He turned at the sound.

Jaeger stepped inside. "The window in my studio is leaking," he said. "The side of the cabinet where I keep my tools was damp. Some of those things can't be replaced easily, Maggie." There were two deep frown lines between his eyebrows.

Jaeger was a mask-maker. He could turn what other people saw as junk into art. I'd seen him at the re-purpose store out by the highway, and a few days ago he'd been scrounging in a dumpster in the front yard of a reno halfway down the hill from my little house. Jaeger sold both his masks and some of the elaborate preliminary sketches he made for them in the store.

"Ruby told me," Maggie said. "Someone's coming to take a look at it this morning."

"I wanted to get some work done and instead I had to waste a lot of time sticking my stuff in boxes. Again. " He dragged his fingers back through his blonde hair. A couple of weeks ago he'd cut off a good six inches. It made him look more serious, less bohemian. "The building needs a manager."

"River Arts does have a manager," I said. "The town owns the building."

"Too much bureaucracy and too little money," Jaeger said derisively. "The center should have a corporate sponsor. So should the store."

Maggie placed a loosely closed fist against her breastbone and took a slow, deep breath. I knew that was her way of staying calm and in control. "The artists own and run the store," she said. "So they can make the decisions."

He gave his head a slight shake. "Like I said before, what the hell does the average artist know about running a business?"

Maggie was the current president of the co-op board. I thought about how hard she'd worked to promote the artwork and the artists at the shop in just the year I'd known her.

"I'm sorry about the leak," she said. "There isn't anything anyone can do about all the rain. Everyone is frustrated and tired, Jaeger."

He crossed his arms over his chest. "This is a ridiculous way to run a business," he started.

"The weather and how we run the co-op are two different things," Maggie said. Her tone hadn't changed at all but there was something just a little intimidating about the way she stood there so perfectly straight and still. "If you have problems with River Arts go to the town office, call public works, call the mayor. Save everything else for the meeting."

She tipped her head to the side and looked at him. If it had been an old western this would have been the point where the audience did a collective "Ohhh." Maggie could outstare anyone, even my Owen and Hercules, who were masters of the unblinking glare.

Jaeger's mouth opened and closed. He shook his head. "This is stupid," he muttered. He pushed past us and headed upstairs.

"What was that?" I asked once he was out of sight.

Maggie gave me a wry smile. "Mostly Jaeger being Jaeger. You know he's been pushing for the co-op to find a patron almost since he first got here?"

"With the flooding and having to move everything in the store, he's just gotten worse. There are days I regret welcoming him into the co-op and helping him get that part-time job at Eric's." She let out a breath, put one hand on the back of her head and stretched. Then she looked at me. "I should check the basement."

"Okay," I said. I followed her through the empty store to the back storage room. She flipped the light switch and unlocked the door. Three steps from the top of the basement stairs she stopped, sucking in a sharp breath.

"Is he dead?" Maggie asked in a tight voice.

I leaned around her to get a better look at the body. "Yeah, he's dead."

I moved past her on the steps so I could see better. The corpse of a large, gray rodent was floating on its back, near the stair railing, in the four feet of muddy, smelly water that filled the basement at the moment. "He's not doing the backstroke, Maggie," I said. "He's dead."