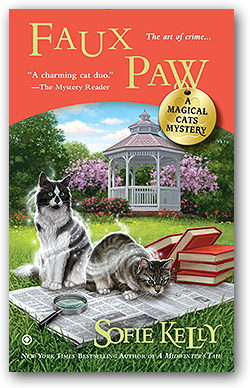 By the time I was ready for work there was still no sign of Owen. "I'm leaving," I called. After a moment there was an answering meow.

Hercules was in "his" spot on the bench in the porch. He went ahead of me out the door—waiting for me to open it this time—and waited at the edge of the lawn.

I looked across into Rebecca's backyard. I still thought of the small, blue house as Rebecca's, even though she and Everett were married now. Rebecca was one of the first people I'd met when I'd arrived in Mayville Heights and I admit I'd been happy when she'd told me that she and Everett had decided to live in her little house after the wedding.

I could see Everett in the gazebo, seated at the table with his coffee and the newspaper. I knew there would be a treat for Hercules as well.

"Merow," the cat said, winding around my ankles.

I bent down and scooped him up. He nuzzled my chin.

He licked my chin and looked up at me as if to say, "Is it working?"

"You're spoiled," I told him as we headed across the grass.

Everett smiled and got to his feet. "Good morning, Kathleen. Good morning, Hercules." He was wearing a crisp white shirt with a navy and red striped tie, along with the trousers and vest of a gray suit. His beard and white hair were closely cropped and he looked every inch the successful—and self-made—business man that he was, with a bit of the sex appeal of actor Sean Connery thrown in.

Hercules jumped up onto the wide railing of the gazebo. Everett took a tiny container of cat kibble from the table and set it next to Herc. "All natural ingredients," he said to me.

"You've been talking to Roma," I said with a grin.

Roma Davidson was the town veterinarian as well as one of my closest friends. She'd decided that the boys had been eating way too much people food and she'd made it her mission to get people to stop sneaking them toast and peanut butter (me) or pie (Rebecca.)

He nodded. "I have my orders." He gestured at the stainless steel coffee carafe on the round, metal table. There was a second stoneware mug next to it. "Do you have time to join me for a cup of coffee? I'd like to discuss something."

I glanced at my watch. "I have a few minutes."

"Good," he said. "Have a seat." He indicated the other chair at the table and reached for the carafe. Hercules already had his head in the little dish.

I gestured in the cat's direction. "If he becomes a bother, let me know."

Hercules turned his head to look at me, his green eyes wide.

Everett set the mug of coffee in front of me. "Hercules is good company. He has some interesting insights on what the town council has been up to." A smile pulled at the corners of his mouth and was reflected in his eyes.

The cat made a soft murp of self-satisfaction and went back to his treat.

I reached for the small pitcher of cream. "I'll be sure to get his input before the next council elections," I said with a completely straight face.

Everett leaned back in his seat and straightened the crease in his trousers. "You could do worse," he said. He regarded me over the top of his cup, his blue eyes narrowing. "How are things going at the library?"

I knew he didn't mean in general. Patron visits were up, so was borrowing and Lita—Everett's executive assistant—and I had just recently secured a grant to add more books to the children's department. In recent months we'd hosted several workshops and talks that had brought people all the way from Minneapolis. The most recent special event at the library was a travelling exhibit of museum art from the 1800s. I knew that's what Everett was referring to.

Everett gave a snort of laughter. "In less politically correct terms Margo Walsh is a pain in the ass."

He shook his head. "You're probably the only person who's worked with the woman who would say that."

Margo Walsh was the curator of the exhibit. Its focal point was a detailed drawing of a Dakota encampment by military artist Sam Weston, who had lived in Minnesota early in his career. The drawing belonged to Marshall and Diana Holmes. The brother and sister had inherited it, along with other artwork, after the recent death of their father. The Weston sketch, as well as several other pieces in the show, were on long-term loan to the museum, but somehow the siblings were very involved in every aspect of the exhibit, probably because their late father's money was funding it.

I'd watched Margo with both of them and I got the feeling from her body language that she would have been happier if they'd been a lot less involved. According to my friend Maggie, who was an artist herself, when someone loaned a piece from their collection to a museum that was generally the end of their involvement. Marshall and Diana Holmes didn't seem to know that.

At each stop on the exhibit's tour Margo was featuring artwork from local artists. Maggie, who had two pieces of her art in the show, had been impressed with how much the curator had known about the local art scene and how positive she'd been.

Margo may have been enthusiastic about the artists who were part of the Mayville Heights artists' co-op, but she was decidedly unenthusiastic and vocal about the exhibit's delicate paintings and sketches—some of which were over two hundred years old—being out of a climate controlled museum setting.

I took another sip of my coffee as I tried to think of the best way to explain Margo Walsh to Everett. "Margo is very, very good at what she does," I said. "She and Maggie have spent hours finding just the right frames and mats for the local pieces that are in the show. She's studied the way the light comes in through the windows at different times of day just to make sure they're shown at their best."

One of Everett's eyebrows went up but he didn't say anything.

He studied my face for a moment and seemed to be satisfied with my response. "If there's anything I can do," he began.

"I know, call Lita," I said. The exhibit had come with grant money to install a temporary security system at the library. I was already talking to Lita several times a day. "You could give her a bonus when this is over," I added with a smile. "I couldn't do this without her."