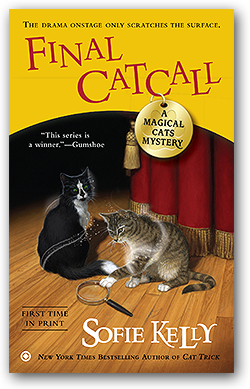 I picked up my fork and in between bites told the boys what had happened at the library, how Andrew and I had ended up in the marina parking lot, and how I'd raced him up the stairs and then almost fallen over Hugh Davis's body.

Hercules turned his head to look at the schedule for feeding the cats at Wisteria Hill.

Owen had finished his sardine and was licking the remaining fish oil out of his dish. At the sound of Marcus's name his head whipped around like it was on a swivel and he and his brother locked eyes. Some kind of unspoken message seemed to pass between the two cats, then Owen dropped his head again and Hercules brought his attention back to me. It seemed a little...well...crazy to think the two of them could somehow communicate without making a sound, but considering their other talents it wasn't really that far-fetched. Was it?

Hercules gave me another head butt.

I slid down in the chair and scratched the place just above his nose where the white fur of his face met the black fur on the top of his head. "And yes, I talked to him," I said.

He made a small murp sound.

"Nothing's changed," I said with a sigh. "Except I seem to be mixed up in one of his cases. Again."

Owen had come to sit by my feet. He gave an enthusiastic meow.

"No, that's not a good thing," I said, testily. More than once in the past couple of weeks I'd almost gotten the sense that the cats wanted Marcus and I to get back together. The rocking chair had been in the living room for over a week, but as far as I could tell neither cat had tried to sit in it, although they tried to herd me—deliberately it seemed—to sit in it a couple of times.

I looked at one cat and then the other. "I'm not talking about Marcus," I said firmly.

Owen stared at me for a minute then turned to look expectantly at the back door.

A second passed, and then another and then I heard a knock. I stood up and set Hercules on the floor. "How do you do that?" I said, bending down to give Owen a quick scratch behind one ear. All I got for an answer was a twitch of his whiskers. I padded out to the porch door in my sock feet. Andrew didn't give up easily. I rolled my head from one shoulder to the other and then I opened the door.

It wasn't Andrew standing there. It was Marcus.

"Do you have a few minutes?" he asked. "I have a couple more questions." His hair was windblown and in the light I could see he needed a shave.

He followed me into the kitchen. Owen and Hercules were sitting by the refrigerator.

I gestured at the table. "Have a seat. I was about to make some hot chocolate. Would you like some? Or I could make coffee."

"Hot chocolate's fine. Thank you," he said. Then he leaned forward, hands between his knees. "Hello," he said to the cats.

"Meow," Owen said. Hercules was content to just dip his head in acknowledgement.

I put milk in the microwave to warm and got two mugs and my stash of marshmallows out of the cupboard. Then I leaned against the counter. "You have questions."

He nodded. "Tell me again how you found Hugh Davis's body."

I repeated the story while I waited for the milk to heat, leaving out how I'd tried to race Andrew to the top to the stairs.

"And you didn't see anybody up on the lookout?" Marcus asked as I set a steaming mug in front of him.

"No. But it was starting to get dark."

I dropped a couple of marshmallows into my cup. The scent of vanilla mixed with the cocoa. I pushed the container across the table to him. "Would you like a marshmallow?" I said.

Marcus squinted into the little china bowl. "They don't look like marshmallows," he said.

"That's because they're homemade."

"You made marshmallows?" He still had that skeptical look on his face.

"I didn't make them," I said. "Maggie got them for me at the farmer's market. The Jam Lady makes them."

I laughed. "You're as bad as Owen. Try one." At the sound of his name, Owen, who had been washing his tail, lifted his head.

Marcus picked up the dish. "Well, what do you think?" he asked the cat.

Owen tipped his head to one side and his whiskers twitched as he sniffed the air.

Marcus held out the bowl. "They do smell pretty good."

Owen swiped one gray paw over the top of the small bowl and a plump marshmallow landed on the floor at his feet.

The cat immediately began to sniff his treasure.

"You better not put a paw on that marshmallow," I warned, pushing back my chair and getting to my feet.

Owen's eyes flicked in my direction and then he dipped his head and licked the top of the marshmallow. He looked up at me, defiance in his gold eyes.

Marcus started to laugh as a look passed between man and cat.

"You better not have done that on purpose," I said, glaring at Marcus.

He picked up two marshmallows for himself and dropped them into his mug. "I didn't. I swear," he said holding up a hand.

I reached for the marshmallow on the floor. Owen yowled his objections and raised a paw.

"You're just as bad as Maggie," I said. "Roma will have my head if she finds out I let Owen have marshmallows."

He reached for his hot chocolate. "Well I'm not going to tell her," he said. He leaned sideways to look at the gray tabby, still guarding his prize, one paw ready to swat away anyone (me) who tried to take it way.

"Marshmallows are not good for cats. They're going to stick to his teeth. Are you planning on hanging around to brush them?"

Marcus's expression turned thoughtful. "Maybe you could make a trade."

Owen's gaze had been shifting between Marcus and me. Now he meowed softly.

"Fine," I said. "I'll trade half a sardine for that marshmallow."

"He already had one sardine. One half."

"One. Fish is brain food." Marcus leaned back in the chair and folded his arms over his chest. "You're the one who pointed out that he's going to have marshmallow stuck to his teeth if he eats it. "Do you want to floss his teeth tonight?" He glanced at Owen who somehow seemed to be following the conversation and chose the perfect moment to lean down and lick the marshmallow again.

I knew when I was beaten, but I made them wait just a few moments longer before I gave in. "One sardine," I said, holding up a finger. "One." I leaned forward and snatched the marshmallow off the floor before the two of them tried to up the ante. Then I got Owen his sardine and another for Hercules who had sat silently watching and listening to the "negotiations" with a bemused expression on his black and white face.

I sat back down at the table and Marcus smiled at me. "You're right," he said. "These marshmallows are good.