Hooked on a Feline 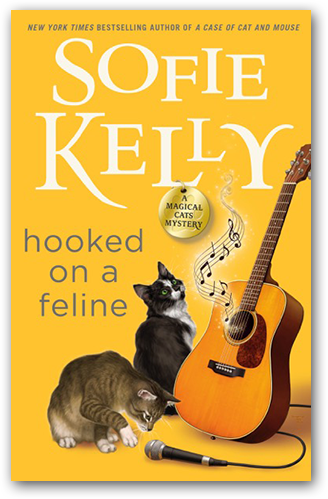 The stage set up at the end of the marina parking lot was in darkness and there wasn't enough light from the stars and the sliver of gleaming moon overhead to make out anything, even though we were sitting just a few rows back. The crowd spread out across the pavement on lawn chairs and coolers had gone silent, so silent it seemed as though we were all holding our breath. But underneath that silence I could feel a faint buzz of anticipation, like the current of energy in the air just before a thunderstorm hits.

And then a clap of wood on wood—one drumstick hitting on another, counting down the beat—One! Two! Three! Four!—cracked the quiet. And all at once there was music: the sound of a raucous electric guitar, and the crowd went wild. Beside me my friend Roma was grinning, bouncing on her canvas lawn chair, her dark eyes shining. She leaned sideways, bumping me with her shoulder. "That's Harry, Kathleen," she said in my ear, "which has to mean—"

She didn't get to finish the sentence because the smooth voice of the announcer boomed through the sound system, drowning out everything else. "Please welcome—after a very long absence—Johnny Rock..." He paused. I leaned forward, suddenly knowing what his next words had to be. And then they came. "...and the Outlaws!"

The stage lights came up and the crowd really went wild then, cheering, clapping, hooting and whistling. I couldn't take my eyes off the stage because that amazing electric guitar was in the hands of Harry Taylor—Harry, who mowed my lawn and kept just about everything running at the library for me. He was in his fifties with just a little hair left, his face lined from years of working outside in the sun. Harry looked like someone's dad, practical and dependable, which he was—not like some rock star guitar virtuoso—which it seemed he also was. I'd known Harry played guitar. I'd known he'd been in a band, in this band, but I was dumbstruck that I'd had no idea he was so incredibly talented.

Roma was already moving to the music. "Close your mouth, Kath," she said, grinning as if she'd guessed what I'd been thinking. "I'm pretty sure you just swallowed a bug."

I didn't get a chance to answer because Johnny Rock had started to sing John Mellencamp's R.O.C.K. in the USA, striding on to the stage from the left side. His voice was full and strong with just a hint of a raspy edge to it.

Johnny Rock, aka John Stone, looked like he could have been actor Bradley Cooper's older brother—blue eyes, brown hair shot with a bit of gray waved back from his face, long legs and muscular arms in a tight, black tee shirt and faded jeans. He had that same naughty boy grin as the actor as well.

Harry was just behind Johnny's right shoulder, a few steps back. He, too, wore a black tee shirt and jeans, but not his ubiquitous Twins ball cap. I realized that he was playing the same solid body Fender Stratocaster that he'd brought to Reading Buddies at the library where he'd led the kids in an enthusiastic version of The Beatles' Yellow Submarine. The song had been stuck in my head for days afterward.

Beside me Roma was already up and dancing. It seemed like the whole crowd was on its feet, spilling across the parking lot onto the grassy riverbank. Roma grabbed my hand and pulled me off my chair. "I can't believe they kept the whole band coming back together a secret."

"Me neither," I said, leaning sideways so she could hear me. Harry had been in the library just a day ago and there had been no hint from him that he'd be on stage tonight when I'd said I was looking forward to seeing Johnny in concert. I had no idea Harry was so good at keeping a secret. It seemed there were a lot of things I didn't know about Harry Taylor.

"Well, Mike checked my cracked tooth on Thursday and he didn't give anything away, either," Roma said, raising her voice over the crowd noise.

Mike Bishop, who had expertly completed a root canal on my upper left molar just recently, was also up on stage, playing bass, standing behind and to the left of Johnny. Like Johnny and Harry he was wearing jeans and a black shirt, along with a dark gray fedora over his gray curls. And he couldn't seem to stop grinning. He raised one arm in the air. "C'mon people, you should be dancin'!" he shouted.

The outdoor concert was part of the Last Bash, a revival, after 25 years, of a summer festival celebrating food, music and small town life. Mayville Heights was trying to bring back the celebration as a way to entice more tourists to our Minnesota town. The highlight of the event for just about everyone was the return to the stage of Johnny Rock, who had been a local celebrity in his teens and twenties, first as the lead singer of Johnny and the Outlaws and then as a solo performer. Johnny had gone on to become a very successful businessman. He had just sold his real estate development company and was going back to his first love, music.

I closed my eyes for a moment and just focused on Johnny's voice as the band segued into Boston's More Than a Feelin'. I draped my arm around Roma's shoulders and we swayed back and forth to the music, heads together like we were teenagers. The 1976 rock ballad showcased Johnny's vocal range. He was good—not just small town bar band good—good enough to have had a career as a working musician, in my opinion. And I knew a little about the music business. My brother, Ethan, had his own band back in Boston, The Flaming Gerbils. I'd learned from watching his career develop how mercurial the music business could be, how it took more than talent, how sometimes it seemed that talent was the least important factor. I couldn't help wondering what had derailed Johnny's long ago musical aspirations.

Roma was singing "it's more than a feeling," softly by my ear. I opened my eyes. Next to Roma her husband, Eddie, and our friend, Maggie, were dancing. I knew Mags could dance but I hadn't known that Eddie could. I shouldn't have been surprised. Eddie Sweeney was a former NHL player. He was tall and fast and smooth on his feet, even without skates.

To my right Marcus—my Marcus—was dancing with Mary Lowe. Mary was easily a foot shorter than he was and several decades older, but she had some smooth moves herself. She caught my eye, raised her eyebrows and gave me a saucy grin.

I smiled back at her.

It was one of her favorite expressions, but she was right. This was going to be one of those nights I knew I'd remember for a long time.

The band came to their last song way too soon. "You know, I could stay out here all night," Johnny began.

"Do it!" a voice yelled from somewhere on the edge of the riverbank. There were echoes of the words all through the crowd.

Johnny smiled. "Believe me, I'd like to, but like they say, all good things must come to an end." He gazed out over the crowd. "Thank you all for coming tonight and I hope you liked my—" He turned and looked over his shoulder at the guys behind him. "—our little surprise."

People started clapping again. I leaned back against Marcus's chest and he wrapped his arms around me. I wished the band could keep playing all night. I didn't want to be anywhere except where I was right now.

Johnny walked back to Mike and leaned an elbow on his friend's shoulder. Mike's hands were resting on his glossy black String Ray bass. He was about average height, with a stocky build and strong arms. He had a great mischievous grin, which he was giving to Johnny now.

"Mike and I met on the playground when we were what? Six years old?" Johnny asked.

"Another kid, who I won't name," Johnny coughed, "Thorsten." Everyone laughed. "Had just knocked out one of my front teeth with a swing. Mike looked all around and found the tooth in the grass. He gave it to me so the tooth fairy would come."

"We kinda lost touch for a while and then Mike came to audition for the band. And we've been friends ever since."

Johnny shook his head. "Really?" he said. I wasn't sure if he knew the punch line to Mike's story but I knew there'd be one.

Mike nodded. "Absolutely. Not really very flashy." He raised an eyebrow. "No sequins. And sometimes makes you just a little uncomfortable." He held up a hand again. "But when life kicks you in the—" The drummer rolled a flourish on the cymbals. "You know you're always covered!"

Mike pointed a finger at Johnny. "Love you, man."

"Friends to the end," Johnny said.