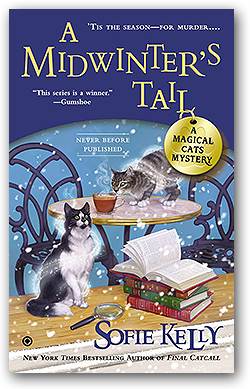 We closed the building at four thirty because of the fundraiser. I double-checked the conference room before I left, and made one more trip back up to the staff room to make sure we had everything we needed for morning.

Susan was waiting for me by the front door, bundled into her red, down-filled coat. "Everything's done, Kathleen," she said. "I put a few more chairs in the conference room and ran the vacuum around in there."

"You are an angel," I said as I hurried across the floor to her.

"Yes, I am," she replied, grinning at me. "Now let's get out of here. I have to get home and make myself even more beautiful than I already am."

I set the alarm, locked the doors and we headed for the parking lot. It was cold, but it wasn't snowing and the sky was clear overhead.

"It's going to be a great night," Susan said. She'd pulled the brim of her hat down and turned the collar of her coat up, so all I could see was her eyes, sparkling behind her black cat's eye glasses.

She made a sweeping gesture with her right hand. "Prepare to be dazzled," she said.

A bit of snow had blown on to my windshield. I brushed it off before I slid on to the driver's seat of my truck. The truck was old and an ugly brown color, like the bottom of a mud puddle, but it ran well and it had a great heater. Harry Taylor Senior had loaned me the truck and then given it to me outright after he'd found his daughter, Elizabeth. I had retrieved some documents that had helped the old man in his search for her and the truck was his way of saying thank you.

I drove up Mountain Road thinking I'd warm up the last of the chicken noodle soup I'd made on the weekend for supper. That would give me a bit of extra time to spend with my cats before I had to get ready for the gala. Owen and Hercules had been out of sorts the past couple of days. If I hadn't known better, I would have said that they were miffed because they weren't going to the gala. The boys, brothers I'd had since they'd followed me home, weren't exactly your everyday run of the mill house cats. Sometimes I had to remind myself that they weren't people, either, even though they seemed to think they were.

I parked in the driveway and headed around the house to the back porch, mentally going over everything I needed to do before I headed back down the hill to the party at the Stratton Theatre.

My foot was on the bottom riser of the porch stairs when I heard it. Exactly what the noise was, I wasn't sure. All I could tell was that there was some kind of God-awful sound coming from my kitchen.

I knew it was stupid to go inside when I didn't know what was in there, but Owen and Hercules were in the house. It sounded as though there was some kind of injured animal inside with them. I hesitated and then I heard what I clearly knew was a yowl from Owen.

Fumbling with my keys I got the porch door unlocked, and I dropped my purse and briefcase on the bench under the side window. I grabbed the broom that I'd used that morning to clear a dusting of snow off the steps. I had no idea what was in my kitchen or how it had gotten into my house, but whatever was terrorizing my cats was about to meet the business end of that broom.

I heard another yowl from Owen and I wrenched the kitchen door open and launched myself into the space, swinging the broom like a pirate's cutlass.

Detective Marcus Gordon turned from the stove and smiled, waving the wooden spoon in his hand at me. The radio was playing softly in the background. Marcus was singing along to Aerosmith. Not at all softly. And not at all remotely on key, either.

Owen was perched on one of my kitchen chairs, bobbing his gray tabby head along with Steven Tyler. The cat seemed to be joining in on the chorus, or maybe he was singing harmony. I wasn't exactly sure.