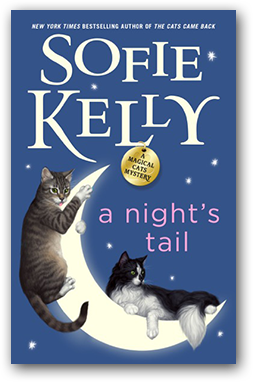 Off to the side I suddenly heard the sound of a dog whimpering followed by raised voices. Marcus and I both turned in the direction of the noise. Two tables away, closer to the busy bar, was a man who looked to be in his early thirties with a service dog, a beautiful German shepherd with dark-chocolate-and-black coloring. The man had two prosthetic legs. A veteran, maybe? One arm was wrapped protectively around the dog. He was exchanging words with another man, who loomed over them.

The second man was just under six feet or so I was guessing—with a thick midsection, more fleshy than muscle. His brown hair was cut in a style that had taken a lot more than twenty minutes in a barber's chair. I was pretty sure his sweater was cashmere. His jeans were worn at both knees, but it was the kind of worn that he'd paid a lot of money for, not the result of a lot of hard days' labor. And he was drunk. I could see that his face was flushed and he swayed just a little. He wasn't standing up straight, I was guessing, because he wasn't capable of it.

Keith King was sitting at the same table and he got to his feet. Keith was on the library board and he was dad to Taylor, who had worked on our summer reading program. I couldn't catch all of what he said to the drunk but I could see the tension in his body, in his clenched fists and the rigid way he held his shoulders. The situation was close to getting out of hand. I couldn't get most of the drunken man's words but I could hear his tone and I didn't hear any remorse. He'd done something to the dog—kicked it most likely—that much was clear, and it didn't seem as though he was sorry.

Marcus had already gotten up and was making his way to the table with Brady right behind him. Before they could close the distance the drunk said something to Keith and I saw him pull back his leg, like he was going to kick the dog a second time.

He didn't get the chance. Derek was passing the table on his way up to the bar. His right fist caught the left side of the man's jaw. He swayed backward like an old-style inflatable clown punching bag. Marcus caught the man by the shirt collar just as one of the bouncers reached them. Derek gave his fist a shake like he was shaking off a cramp. I hadn't noticed him detour from his trek to the bar. Now he stood there glaring at the intoxicated man.

Everyone at the table had gotten to their feet with the exception of the man with the prosthetic legs. Keith and Derek were both talking at the same time. The drunk was shouting and rubbing his chin. For a moment I thought I heard him say something about Christmas, which didn't make any sense. Marcus spoke to the bouncer, who nodded and then stood there, arms folded, black T-shirt stretched smooth over his muscles. Still holding on to the drunken man by the scuff of his neck, Marcus leaned down and spoke to the dog's owner. When he straightened up he said a few words to Derek before sending him back in our direction.

"You all right?" Ethan asked as Derek reached the table.

Derek nodded. "Asshole," he muttered darkly. The knuckles on his right hand were already starting to swell. Maggie pushed away from the table and headed to the bar without a word.

"Do you know that man?" I asked. "I thought I heard him say something about Christmas."

Derek flushed. "I think it was just a shot at my clothes." He glanced down at the red quilted vest and red-and-black shirt he was wearing. "Guy's a jerk."

I glanced around, wondering where the band we had come to hear was. People were restless, a lot of them on their feet, and too many voices just a bit too loud seemed to rumble through the room like distant thunder, warning that a storm might be ahead. Marcus may have diffused the immediate situation with Derek and the drunk, but that didn't mean that there still couldn't be trouble. People were looking our way. The drunk had looked familiar for some reason I couldn't place. I was guessing at least some people in the bar knew who he was.

I leaned across the table. "Sing something," I said to Ethan.

"Yeah right," he said, rolling his eyes. "I'll get the whole place doing 'Row, Row, Row Your Boat' as a round. Or would you rather we all held hands and sang 'Kumbaya'?"

I pushed my hair behind my ear with an impatient gesture. Ethan hated me telling him what to do. I had a mental image of him as a two-year-old, grabbing the socks I was trying to put on his chubby toddler feet, running down the hall and flinging them into the middle of the kitchen floor, standing there, feet planted wide apart, defiance blazing in his eyes.

I glared at him. "Don't act like a guy. I don't see any sign of the band or any more dancers. And it's getting tense in here."

He looked around. I knew he had to feel the unsettled energy in the room. "We don't have our instruments," he said, swiping a hand over his chin. I knew that gesture. He was thinking about what I'd said. "Anyway, we can't just start singing."

This time I rolled my eyes. "Right. Because you've never done that before."

Ethan made a face.

"'A Hundred Other Worlds,'" I said. You don't need instruments for that song." "A Hundred Other Worlds" was my favorite Gerbils song. Ethan had written it. The love song featured just voices and guitar but it sounded equally beautiful with just the guys' perfect harmonies. "Please," I added.

He exhaled loudly. "I suppose next you'll play the 'I changed your diapers' card." The gleam in his eyes told me I'd already won.

I held up my phone. "No, but I could play the video of you drumming on a box of oatmeal wearing nothing but a smile and a saggy diaper."

"You're mean," he said, but he was already getting up.

"And I'm older and I practice while you're asleep," I finished.

Ethan elbowed Milo and raised an eyebrow at Derek, tipping his head in the direction of the stage. Derek nodded and set the makeshift icepack that Maggie had gotten for him—ice wrapped in a striped cotton bar towel—on the table.

Ethan shrugged. "Yeah, well if we don't sing the only other option would be you dancing."

I tried to swat him but he darted out of my way.

The three of them made their way over to the small stage the various bands used. Milo and Derek lined up behind Ethan, hands behind their backs. Ethan glanced over his shoulder at them, then turned to face the crowd and started to sing. He didn't have a mic. He didn't need one.

It started with the tables closest to the stage. People stopped what they were doing to listen, dropping back into their seats one after another, focused on the music, focused on Ethan's voice, on all three of their voices.

It gave me goose bumps. On the other side of the table Maggie was mesmerized. I saw her rub her hand over her arm as though maybe she had goose bumps, too.

A hand touched my shoulder. Marcus dropped into the chair beside me as Brady slid in next to Maggie. I linked my fingers with his but I couldn't take my eyes off of my baby brother. Neither could anyone else.