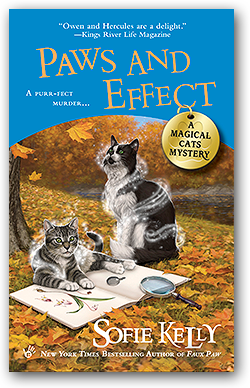 The body was laying on the swing on the back deck, the wooden seat swaying slowly back and forth. Definitely dead, I decided. And it had been placed there no more than half an hour ago.

I'd stopped so suddenly Marcus almost bumped into me. He put a hand on my shoulder to steady himself. "What is it?" he asked, leaning sideways so he could see around me. He blew out a breath. "Not another one. Why does she keep doing this?"

Before I could answer, there was a loud meow and Micah, his small ginger tabby, came walking purposefully along the deck railing toward us. I reached over to stroke her fur. "Nice work," I said. I was certain that Micah was the source of that body—a very large, very dead vole.

Marcus pulled a hand back through his hair, a sure sign he was stressed. "Don't encourage her, Kathleen."

Marcus walked over to the swing and squinted at the dead rodent. "It's the third dead thing this week," he said. "I asked Roma. She said it's her way of showing her affection for me." He looked back over his shoulder at me. "I mean Micah's way of showing affection, not Roma's."

I smiled. "I know. When Roma likes you she takes you to Meatloaf Tuesday at Fern's Diner." Roma Davidson was Mayville Heights's only veterinarian and one of my closest friends. I'd originally come to town to supervise the renovations to the public library in advance of its centenary. Part of the reason I'd signed a contract to stay on as head librarian once the hundredth-anniversary celebrations were over was because of the connections I'd made. Mayville Heights had come to feel like home.

I looked down at Micah, who was intently watching Marcus as I continued to stroke her fur. Like my own cats, Owen and Hercules, Micah didn't give her affection to just anyone. We'd discovered the little cat, abandoned, out at Wisteria Hill, where Roma lived. Although she certainly seemed to like Roma and me now, back then she wouldn't come to either one of us. It was Marcus who had coaxed her out of hiding. Marcus who had picked her up and held her on his lap all the way to Roma's clinic. It was his scarf she'd slept on that first night there. I thought this rash of "gifts" might be Micah's way of showing Marcus she could pull her weight and that she deserved to stay.

Marcus glanced around the deck. I realized he was probably looking for something he could use to pick up the dead vole.

"Go get your other keys and your boots and I'll take care of that," I said inclining my head in the direction of the swing. Bugs, bats and furry critters didn't bother me. I gave Micah one last scratch behind the ear and headed for the storage shed in the backyard.

I was coming across the grass with a long-handled spade just as Marcus came out the back door holding the extra set of keys to his SUV. The two of us had been headed to Wisteria Hill to feed the colony of feral cats that lived out there. When he'd arrived to pick me up, his SUV had died in my driveway. We'd pushed it onto the street so I could back my truck out and stopped by his house to get his spare set of keys. Those he'd drop off to Thorsten Hall, who, among his many other skills, was an excellent mechanic.

"Hey, Kathleen, do you really think I need my boots?" Marcus called to me.

"Roma said the path is mud all the way around the side of the carriage house." I stuck out one leg so he could see that I was wearing my old gum-rubber boots. "But don't worry about it. I can feed Lucy and the others."

"It's okay," he said. "My boots are right here." He gestured to a green rubber pair sitting next to the back door, under the small overhang.

Micah jumped down from the railing and padded over to him, rubbing against his leg as Marcus took off his left shoe and shoved his foot into the corresponding boot. And immediately kicked his foot forward, yelling a word he'd never used in my presence. The boot came off and pin-wheeled up and out over the deck toward the back lawn. A second dead vole that had been dropped inside came shooting out of the open end of the boot. Micah leapt into the air and caught the furry corpse with her two front paws like Lynn Swann catching a forward pass from my dad's favorite quarterback, Terry Bradshaw.

At the same time, the boot arced its way toward me. I sprinted forward, holding the spade ahead of me like some sort of medieval soldier with a lance, catching the boot on the end of the wooden handle. I stopped at the bottom of the steps flushed and sweaty, feeling pleased that I'd stopped the boot from ending up in Marcus's rain barrel.

He was still standing by the back door on one foot with a scowl on his face. Micah was sitting in the middle of the deck with a paw on the vole like an African lion with the prey it had just brought down. And I was holding up the boot, impaled on the end of the spade like the leader of some kind of weird processional.

In retrospect it probably would have been better if I hadn't laughed.