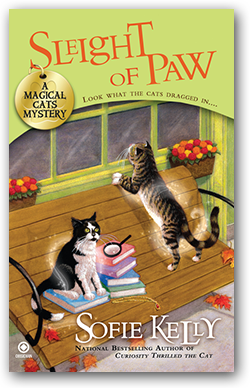 It was pretty clear the body wasn't going to go in the back of Roma's SUV. The legs were hanging out, almost touching the driveway.

"Can't we just push him in?" she asked, kicking dirty snow away from the back tires.

"No, we can't just push him in," Maggie said. "That would break his legs." She walked to the other side of the SUV. "Maybe if we put him in feet first." She looked at me. "What do you think, Kathleen?"

What did I think? I thought it was freezing. "He still won't fit," I pointed out. "Could we take his legs off?"

Maggie looked at me, aghast. "Take Eddie's legs off? How?"

"I have a hacksaw under the front seat," Roma added oh-so-not-helpfully. Because she was a veterinarian she had a number of things in her vehicle that other people didn't.

Wrong thing to say. Maggie laid a protective hand on Eddie's thigh. "Do your legs detach?" she asked.

I exhaled slowly, watching my breath hover in the air. "No," I said, "my legs don't detach, but I'm a human being and Eddie's a mannequin."

The real Eddie Sweeney—"Crazy" Eddie Sweeney—was number 22, a six-foot-four forward for the Minnesota Wild hockey team and the pride of the state—born and bred. Maggie had been commissioned to create a display featuring Eddie for this year's Winterfest. I was pretty sure the Winterfest committee had been expecting Maggie's collage panels, not a life-sized recreation of Eddie in pads and skates. He looked so real, truthfully, that he had given me the creeps the first time I saw him dressed, sitting in a chair in Maggie's art studio.

"Could we wrap him in plastic and tie him to the roof racks?" Roma asked. All I could see were Roma's eyes and nose buried in the hood of her heavy coat.

"Realistically, how far do you think we'd get before someone called the police?" I said.

"We can't leave him like this." Maggie looked skyward. "I think it's going to snow."

"There's a surprise," I muttered.

Winter in Mayville Heights, Minnesota, came in three varieties: About to Snow, Snowing, and Get Out the Shovel. On the other hand, I had to concede that the town looked like something out of an old Currier & Ives greeting card. Snow decorated the tree branches, frost sparkled on windowpanes, and there was a complete snowman in every second yard.

It was my first real winter in town. I'd arrived last year at the tail end of the season to be the new librarian and supervise the renovations to the library building for its upcoming centennial.

I look at Eddie's backside sticking out of the rear of the SUV. "I have an idea," I said. "Roma, can you grab Eddie's left thigh?"

She pushed back her hood. "With pleasure," she said with a grin. She gave Faux Eddie a pat on the behind and caught him by the leg and the waist. I took the other side and we lifted him out of the back of the SUV. Though he wasn't a real body, he was still heavy.

"Be careful," Maggie said, hovering behind us.

"Open the passenger's door," I told her.

"You can't put his feet in the front and his head in the back," she warned. "Once Roma starts driving he'll slide backward and break."

Maggie was my closest friend in Mayville Heights. We'd met when I'd joined the tai chi class she taught, and bonded over our mutual love of the cheesy reality show Gotta Dance. She was a talented collage artist, but I'd never seen her so worked up about a commission.

She chewed her lip for a second, then caught herself. Putting both hands on her stomach, she took several slow, deep breaths. "Sorry," she said. "This whole project is making me crazy. Do whatever you were going to do." She reached over and opened the passenger's door.

"What are we doing?" Roma whispered.

"We're putting him in the front seat. You take the shoulders and I'll take his legs," I said. We set Eddie on the front passenger's seat, legs out to the side.

"Turn him around," I said to Roma. She shifted Eddie to face the windshield, while I moved his legs, resting his skates on the floor mat. Then I leaned in and fastened the seat belt. "Ta da," I said, backing out of the SUV.

Roma walked around to the front of the vehicle and looked through the windshield. "He looks so real," she said.

Maggie couldn't help checking the seat belt herself. Roma closed the tailgate, then came around and got in behind the wheel. I climbed in the backseat, sliding over to make room for Maggie.

Roma backed out of the alley and headed down the street. I'd met her at tai chi, too, but the friendship between the three of us had really been cemented last summer when Mags and I had coerced Roma into helping us follow someone, a la Charlie's Angels.

"Thanks for doing this, Roma," Maggie said.

She smiled at us in the rearview mirror. "I don't mind. How often do I get the chance to drive around with a celebrity?" She reached over and patted Eddie's shoulder. "Well, sort of a celebrity."

"Eddie's having the best season of his career," Maggie said. "Forty goals and thirty-five assists so far."

"Really?" I said, working not to let her see me smile.

"And he's probably in the best shape of his career, as well. Did you know he does extra skating drills on his own after practice?"

"I did not know that," Roma said solemnly.

Maggie pulled off a mitten and reached forward to fix the back of Eddie's jersey. "Every single Wild home game has been sold out this season and it's because of Eddie."

I pulled off my own mittens and fished in my pocket for lip balm. "You know, Roma," I said. "I never thought it would happen, but I think Matt Lauer has some competition for Maggie's heart." I saw Roma's face widen into a grin.

"Do you think he can dance?" Roma asked, referring to Matt Lauer's improbable win on the previous season of Gotta Dance.

"Gee, I don't know. He does have some smooth moves."

"Of course not," Roma said. "He's only tall, strong, and gorgeous."

Maggie squared her shoulders. "I'm just a fan of Eddie's athletic abilities—that's all."

"Oh, me, too," Roma retorted. "If I were just a little bit younger . . ." She let the end of the sentence trail away, and grinned.