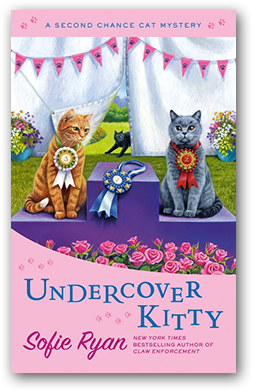 "Elvis?" I said. I folded my arms over my midsection and frowned to emphasize how preposterous I thought the suggestion that Rose Jackson had just made to me was.

"Yes, dear," she replied with the same patient tone in her voice that a kindergarten teacher might use with a five-year-old still learning to tie their shoelaces.

"You want Elvis to do a cat show?"

Rose pursed her lips and studied the pale blue tablecloth that she had just spread over a chrome kitchen table. She looked at me over her shoulder. "I think those woven place mats would look better, don't you?"

So we were changing the subject. Okay. I was used to her doing that.

The retro table and chairs she was looking at, which dated from the early 1960s, were in excellent condition. "You're right. They would be a better choice," I said. "Potential buyers will be able to see what good shape the top of the table is in."

Rose had already pulled the cloth off the table. I moved to grab one end and we folded it, working in unison the way we had dozens of times before. When we were done, Rose hung the cloth over her arm and smiled at me. "Thank you, Sarah," she said. She ges-tured in the general direction of the storage space under the stairs leading to the second floor. "I'm going to look for those place mats."

"Hang on a minute," I said. "You didn't answer my question."

Rose Jackson was tiny, barely five feet tall depend-ing on which shoes she was wearing. Arguing with her was like arguing with a bear over a picnic basket. There was no way it was going to end well for you.

She looked at me now with guileless gray eyes—not that I was fooled for a second by her innocent gaze. "I'm sorry. I thought the answer was obvious. I wouldn't have asked you if I weren't serious. I haven't gotten that feeble yet." She smoothed a wrinkle out of the tablecloth. "And it's two shows."

"Nonsense!" she exclaimed, waving away my words with her free hand. "He has looks. He has charisma. He has talent. He has star quality." She gestured toward the white molded chair by the front window where Elvis was sprawled, a clump of dust clinging to the top of his head, one foot seemingly keeping time with a rhythm only he could hear.

He seemed to be ignoring our conversation, which didn't surprise me since he was a small black cat and not a beloved music icon. To be fair, my Elvis did com-mand attention when he walked into a room, although in the cat's case it wasn't his swivel hips and sexy sneer, it was his adorable head tilt and scarred nose.

"Sarah, we need Elvis for this case," Rose said, her tone matter-of-fact. "We can't work it without him."

Elvis sat up, bent his head, gave a quick wash to the thick black fur on his chest and then looked expectantly at me. It was as if he'd understood the conversation.

Rose, along with her friends Liz French and Charlotte Elliot and Rose's beau, Alfred Peterson—Mr. P.—ran a detective agency known as Charlotte's Angels, the Angels for short, out of the sun porch of my store. Although I'd been skeptical when they'd decided to go into the investigation business, they had turned out to be surprisingly good at it. As Rose had explained, "No one really pays any attention when old people ask questions. Most of the time they don't pay any attention to us at all."

It didn't hurt that between the four of them they knew pretty much everyone in North Harbor—probably everyone one in this part of the state of Maine. To borrow one of Rose's expressions, they were all as sharp as tacks. And they weren't above roping anyone (me) they needed help from into their cases.

Just then, two men came in the front door of the shop. One looked to be in his twenties, the other in his fifties: Father and son, I felt certain. They both had the same vivid blue eyes and dimples. They looked around as though they'd come with a purpose.

"I'll take care of these two." Rose handed me the tablecloth.

"This conversation isn't over," I said.

"Of course not." She smiled and patted my arm. Anyone with any sense would have realized that she was just humoring me.

She headed toward the two men, turning that smile on them. "Welcome to Second Chance," she said. "Are you looking for anything in particular?"

Second Chance was a repurpose shop, part second-hand store and part collectibles shop. We sold furniture, dishes, toys and some musical instruments—mostly guitars. Many things had been repurposed from their original use, like the teacups we'd turned into planters or the church pew that had become verandah seating.

Our stock came from a lot of different places: yard sales, free piles, flea markets, abandoned storage units, people looking to downsize. I bought things fairly regularly from a couple of trash pickers. We'd been hired a number of times to sort through and handle the sale of the contents of someone's home—usually because they were moving into something smaller. I'd even waded into a ditch once after a chair.

I headed for the workroom, stopping to give Elvis a scratch on the top of the head and pluck off the dust bunny. He leaned sideways to take a look at the two customers. Elvis was as much a part of the staff as anyone else. Most people were charmed by his friend-liness and the way he seemed to have an opinion on what they were thinking about buying, often walking around an item with his head cocked thoughtfully to one side and them signaling his okay with a mrrr of approval.

I hung the tablecloth on the portable metal cloth-ing rack that Mac had scavenged from a curbside pile a couple of weeks earlier. He had also come back with two folding wooden chairs, a large wicker basket and a beautiful round mirror with a bevel edge. "It looked like whoever lived in the house had moved out," he'd said as he pulled the tarp off the bed of his truck so I could look at his "finds."

On paper, Mac was my second in command; in practice, he was much more than that. I owned Second Chance, but Mac was a big part of the store's success. He could fix just about anything. He had a good sense of what would catch a customer's eye and he seemed to have an unending number of ideas for ways to give old things new life. Over the past year and a half that the store had been open, Mac had become more of a partner than an employee and now that connection had spread to our personal lives—with a little nudge forward from Rose and her merry band of matchmakers.

I walked over to the workbench where Mac had left a selection of paint cans for me. I was in the process of converting a long, low bookcase into a set of cubbies that I could envision in a mudroom or by a back door. I'd told Mac I was thinking about painting the outside of the piece some shade of gray with two different colors—I was leaning toward blue and red—for the interior. There was enough blue and red paint left over from other projects and I thought the shades of both would go well with gray, but there wasn't enough of the latter in any permutation, including a pretty blue gray I'd used for a games and electronics cabinet. I set the blue-gray paint, which was called Winter Sky, aside. Before I bought any more of it, I wanted to try swatching it next to the red and blue.

I also had a sketch I'd done of what I was thinking about for shelves for the cubby that I wanted Mac's opinion on. I'd changed the spacing three times now. I decided to check on Rose and her customers and then head out to our workshop in the former garage space.

Rose was just coming in the front door with a very self- satisfied smile on her face.

I looked around the shop. "What did you sell?"

"Those two nightstands," she said as she walked over to join me. She gestured toward the bare area on the floor. "A birthday gift."

"I just put them out yesterday," I said. I had stained the two pieces midnight blue. The tops had been painted black and there were brass pulls on the drawers.

"Do you remember the woman who came in about half an hour after you brought them in from the work-room?"

I nodded. "I really thought she was going to buy them."

The woman had walked around the nightstands, looking at them from every angle. "What do you think?" she'd said to Elvis, who had made three of the four circuits with her. He had meowed his approval and I was certain we had a sale, but she'd left without buying anything.

Rose brushed off the front of her apron with one hand. "She did, in a sense. She went home and hinted pretty broadly, from what I could gather, to her husband and son."

"And that was them." I waved a hand in the general direction of the parking lot.

"I suggested they might want to come back in a couple of weeks and look at that tall dresser Mac has been working on. That would look lovely in a room with those two nightstands." She raised one eyebrow. "I might have pointed out that Christmas isn't that far away."

"Rose Jackson, is there anything you can't sell?" I teased.

"Fruitcake," she replied, taking my question way more seriously than I'd intended.