A Whisker of Trouble 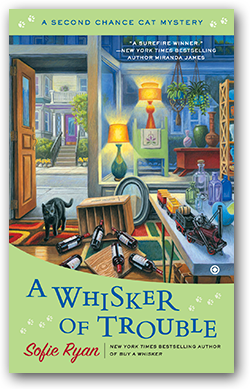 Charlotte arrived about five minutes to nine. Her cheeks were rosy and her white hair was a little mussed.

"Yes, I did," she said. "It was a lovely morning for a walk." She pushed her glasses up her nose and looked down at me. Even in flats Charlotte was at least an inch taller than I was. She had perfect posture—it seemed she was incapable of slouching. And she still had the steely glare of the high school principal she'd been before she retired.

"I'll just go put my things upstairs and you can head out to Edison's." She hesitated for a moment and then reached out and gave my arm a squeeze. "Thank you for taking this on, Sarah," she said. "I've been in that house." She shook her head. "I know Stella tried to get Edison to keep the place up, but he acted like running a vacuum cleaner around would kill him. The dust bunnies have probably taken over."

"I have Mac and Rose and Elvis in case there's anything with more than two legs," I said. "We'll be fine."

"Nicolas is using this against me, you know," she said, pulling the soft cotton scarf from her neck and tucking it into the pocket of her jacket. "He says my garage is in danger of looking like Edison's."

Nicolas Elliot—Nick—was Charlotte's son, a former EMT who now worked as an investigator for the medical examiner's office.

"Did you suggest that maybe he should come and clean it out?" I asked. I'd known Nick since we were kids. In fact, when we were teenagers I'd had a huge crush on him. I'd seen him butt heads with his mother over the years. I'd never seen him win.

Charlotte shrugged. "No. Although I did point out that about ninety percent of the boxes in there belong to him." A smiled played at the corners of her mouth. "That was the last I heard about the garage." The almost smile turned into a grin as she started for the stairs. "I'll be right back," she said over her shoulder.

By quarter after nine we were on the road, with Mac riding shotgun and Rose and Elvis in the backseat. I'd been serious when I told Charlotte that I was taking the cat along to deal with anything that had more than two feet. While I believed that all living creatures had the right to life, liberty and the pursuit of the animal equivalent of happiness, I didn't really want most of the four-legged ones sharing my space while they were doing it—Elvis excluded, of course.

Before I'd acquired Elvis, or maybe more accurately, before he'd acquired me, the cat had spent some time living on the streets around the harbor front. I wasn't sure if that was where he'd honed his skill as a rodent wrangler, or if that particular ability came from his previous life, whatever that had been.

Edison Hall's house was a small white bungalow on the outskirts of town. It was usually a short trip over to Beech Hill Road, but a water main had broken on the street a few days earlier. Now it was being repaved, down to one lane for traffic. When it was our turn to go, I tried not to wince as the tires threw bits of pavement up against the undercarriage of the SUV. Elvis sneezed at the sharp smell of tar and when I looked in the rearview mirror he was making a sour face, despite Rose stroking his black fur.

There was a single-car garage at the end of the short driveway at the Hall house. I was happy to see the Dumpster I'd ordered sitting on a patch of gravel to the left of the garage. As I backed in, I caught a glimpse of the smaller recycling bins against the long right wall of the garage, on the old stone patio by the path to the back door, exactly where I'd asked Aaron Ellison to put them.

"Do you want to leave everything here and take another look around, maybe make a plan of attack?" Mac asked as he undid his seat belt.

I nodded. "Remember all those wine bottles that were in the basement?"

"Apparently Ethan moved them up to the kitchen. Stella left me a message saying they were supposed to all be moved out yesterday, but I want to make sure."

I had told Stella that we didn't have the expertise to handle her brother's wine collection. She'd said that Edison's son, Ethan, was planning on hiring someone to put a dollar value on the bottles so they could be sold.

Rose had already picked up Elvis and was getting out of the SUV.

I pulled the keys Ethan had given me out of the pocket of my jeans and climbed out as well.

I noticed the smell the moment we stepped in the front door. Mac looked at me and frowned. "Rat?" he asked.

I made a face. "Maybe." It wouldn't be the first time we'd shown up at an empty house and found a dead animal. A couple of times it had been mice, once a raccoon and once a seagull that appeared to have fallen down the chimney.

Elvis squirmed in Rose's arms. She looked at me and raised an inquiring eyebrow.

"Let him go," I said. "It's the fastest way to find whatever it is that crawled in here and died."

The cat was already making his way to the kitchen. There seemed to be a path more or less through the stacks of boxes. One thing I could say about Edison Hall: The house wasn't dirty. Charlotte was right about there being dust bunnies everywhere, but there were no bags of garbage, no muddy footprints or bits of spilled food. The place was piled, but I had the same thought I'd had the first time I was in the house with Edison's sister, Stella: The old man had had some kind of system for the boxes that were piled everywhere. The problem was, I had no idea what that system was.

Elvis meowed loudly. I couldn't see him, but from the sound he was in the vicinity of the kitchen.

I shook my head and stuffed the keys back in my pocket. "It's okay. I'll go."

The cat gave another insistent meow. "I'm coming," I called. I made my way in the direction of the kitchen. There was a path through the boxes, although it was a bit like being in a tunnel made of cardboard.

"I'll get the shovel and a couple of garbage bags," Mac said.

The path widened at the kitchen doorway. Elvis had somehow climbed up onto a stack of cartons about shoulder height. He was looking down at the floor, but he turned his head and his focus to me as I reached the doorway.

"Mac, forget about the shovel," I said, raising my voice so he'd be sure to hear me.

"What do you need?" he asked

I hesitated and after a moment he appeared behind me.

"What do you need?" he asked again.

I moved sideways so he could see that the body lying on the kitchen floor didn't belong to a mouse or a raccoon.

"I think we need nine one one" I said.